The second chase set are six new “Quotable James Bond“ cards, again to complete the ones started in previous trading card sets. On both sides the cards depicting a scene from “Casino Royale” accompanied by the quote or one-liner. Sadly these cards were only distributed 1/20 packs, meaning only two cards per box and were numbered as Q01 thru Q06. Like wise the “Dangerous Liaisons” card series, the “Quotable James Bond” card series also ended with “Die Another Day”. This series will also be updated with the release of “Quantum Of Solace”.

To create a third chase set, Rittenhouse Archives Ltd. manufactured ten “Casino Royale Expansion” cards. Now it becomes really difficult, this third chase set contains something of everything. It was like “let’s make an overview of how we can complete all the previous sets with a “Casino Royale” extension”. First of all there are three “Casino Royale” plot cards to complete the base set of the “James Bond 40th Anniversary” card set and three chase cards to complete the different chase sets. In the second place there are four new chase cards to complete all the different chase sets for the “Dangerous Liaisons” cards series up until “Casino Royale”. By using this updating technique, all the previous card sets manufactured by Rittenhouse Archives Ltd. are now complete from “Dr. No” until “Casino Royale”. But for how long? Is this a way to sell trading cards?
The new extension cards depicting pictures of Daniel Craig as James Bond, Le Chiffre, Felix Leiter, the Bond Girls Vesper and Solange and the last card, a Bond Extra card showing all the gadgets. Eva Green who played the role of Vesper Lynd is the daughter of the famous French actress Marlène Jobert. She was born on the 5th July 1980 in Paris. Caterina Murino who took the part of Solange was born on the 15th September 1977 in Cagliari. In 1996 she reached the fourth place in the Miss Italy contest.

New for this trading card series are the so called “Relic Cards”. Relic cards contain a little piece of a prop that was used on the film sets while shooting the movie. This could only be achieved by Rittenhouse after EON Productions opened their enormous archive jammed with James Bond props and offered them the use of double copies or broken props. This was the straw that broke the camels back and the end for all the die-hard James Bond memorabilia collectors who had to have everything, as almost every relic card is different, it is impossible to collect or even to see every relic card. The cards were distributed by 1/40, or just one per box. At least we have eBay that comes to aid to collect all these precious and exciting props. The relic card RC13 containing a blue 500$ Casino Chip was offered on eBay for 452€. Another variation of relic card RC13 was offered in July 2010 for a stunning £599,99. Nobody was interested for a price like that. Would you? 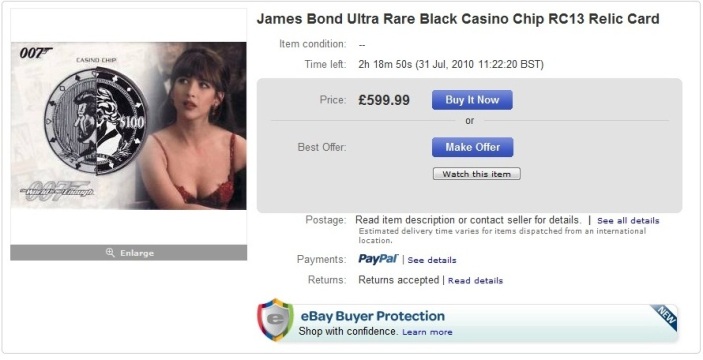 With more then 40 years of James Bond movies, the list of props used in each movie is enormous. The relic/ prop variations are endless, for example the medical file on Jinx is completely cut in to pieces, the same for the Octopussy circus program, casino chips in different colours and so on. A small list of what you may find in one of your purchased boxes is printed here below;

Relic card RC18 was for sale in february 2019 for the staggering price of 684,08 EURO, I wonder who bought it? With a price tag like that it's impossible to collect all the cards!

In August 2020 during the covid-19 pandemic I discovered two sets of four Relic cards that makes a complete tarot card of "The High Priestess" and "Queen Of Cups". The price for these four card sets is above staggering, see the eBay listing and the card set here below. I always wonder who buys cards at these prices?

Again the autograph collectors are treated well by Rittenhouse, more than twenty-five personally signed cards are added to the still growing collection. With exception from the case toppers, the autograph cards are all in the 40th Anniversary style. Lucky for the collectors is the fact that each box contained at least one autograph card and one relic card. Among the many signers Rittenhouse Archives included the following actors and actresses;

As a bonus to every case we have the exclusive case topper Dual Costume Card. This exclusive card contains two pieces of fabric, one from the tuxedo and one piece of the shirt worn by Daniel Craig as secret agent 007 in “Casino Royale”. Again you may find several variations on this particular card, notice the following examples.

A James Bond trading card series with only one case topper, that’s not possible were the thoughts of Rittenhouse Archives Ltd. and so they added another two exclusive case toppers to this series. The second case topper card came as a bonus when purchasing two cases, this exclusive card is a full bleed autograph card personally signed by George Lazenby. In the 1969’s James Bond movie “On Her Majesty’s Secret Service” he took the part as James Bond. After several offers from the producers, and taking some bad advice, he never returned to the EON produced series, but he did come back to the role of James Bond, although it may be only hinted at in the TV-show or movie. As an example we have a spy in a white tuxedo driving a DB5 who briefly helps Roberts Vaughns “Solo” and is called “James Bond In The Return Of The Man From U.N.C.L.E.”, he can now be seen at many memorabilia events around the world. The third case topper came as a bonus when purchasing at least six cases, again a full bleed autograph card, this time personally signed by Denise Richards. In 1999 she played her part as Dr. Christmas Jones opposite to Pierce Brosnan’s James Bond in “The World Is Not Enough”. She became famous for her role in the blockbuster “Starship Troopers”. On the 31st August 2007, this particular card was sold on eBay for a staggering 295$.

To promote this huge trading card, three different promo cards were produced. The card known as P1 was distributed generally; card P2 was only available through a Non Sports Update Magazine and the third card was only available when purchasing the specially designed collectors album. The promotion card P1 depicts six randomly selected images of Bond girls, promotion card P2 is a must have for every James Bond fan because it depicts the six different actors that played James Bond and the third promotion card P3 shows six randomly chosen villains or baddies.

To coincide with all the previous card sets, Rittenhouse manufactured a collector’s album to protect and store this whole new card series. As a bonus when purchasing this album, you received the promotion card P3 and the autograph card personally signed by Jeremy Bulloch aka MI6 agent Smithers. 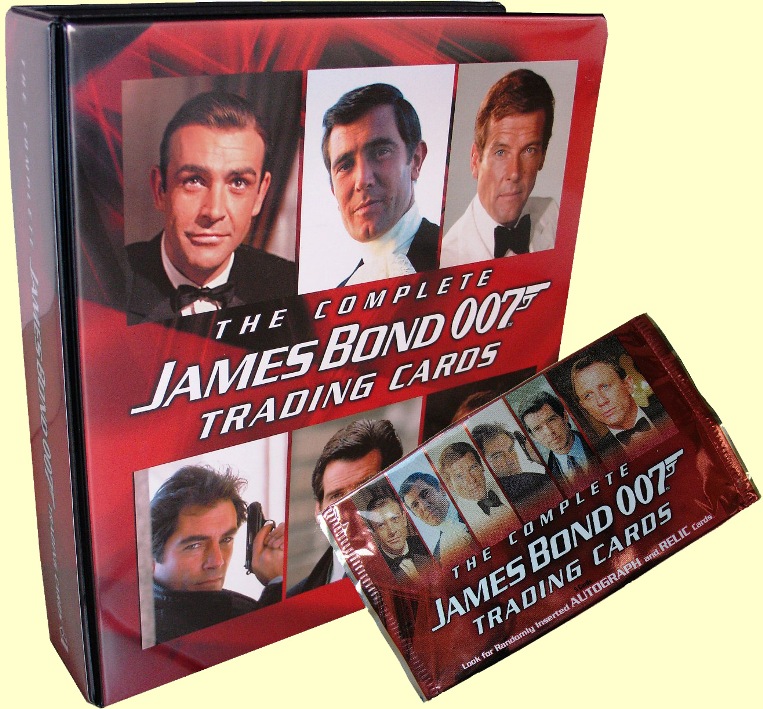 Already seen before in the previous card series issued by Rittenhouse Archives is the so called archive box. This time the archive box contained all the chase cards except for the following relic cards; R08, R13 and R18. A complete master-set was offered on eBay for 3500$. Talking about easy collecting! 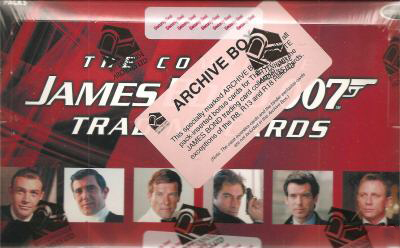 Until know this is the biggest set released by Rittenhouse, 189 cards or 9 cards for each movie. Starting from "Dr. No" to "Live And Let Die" the cards are printed in black and white, the following movies are all printed in full colour. Each card has a piece of a puzzle printed on the reverse. A full puzzle reveals the movie poster. The poster is different from the small size poster printed on the front of one of the cards. The set was expanded in 2009 with nine "Quantum of Solace" cards. The cards came as an insert with the "James Bond Archives". Another expansion came in 2014 with nine new "SkyFall" cards. These cards came as an insert with the "James Bond Archives Edition 2014". All the cards are shown here below.